This Just In .......Application for Venexia Doctore Position 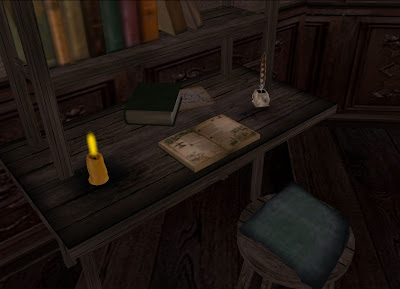 Resume
General Information:
Character Name: Plague Doctor
Race: Borghesian (currently)
Official Name: Ignazio
Age: 30 years old
Address: Arsenale #2 - Venexia
Summary of History:
According to what the Plague Doctor has informed, he is member of an old and prestigious mortal family, one among the first mortals to become Borghesians. His father was the former count of the San Lorenzo city, a small in Italy renowned for its underground crypts and dungeons beneath the city castle, as well as the "Schola Medica Lorenziana", one of the most famous medicine universities in the entire Italy.
As Vampires raised from the shadows, a Bathory master, whose name has disappeared in the sands of time, was indicated to take control of the city in order to develop his own studies in the vampire anatomy, among other issues. For this sense, the Bathory master gathered doctors from several parts of the world, including famous Persian’s and Arabic’s physicians, as well as the majority of the former Schola Medica Salernitana, including the doctors responsible for teaching the new surgical procedures developed by the famous Rogerius Salernitanus.
On its first years, Schola Medica Lorenziana was a great success for mortal standards - uniting in a single university different experiences and knowledge from everywhere in the globe. Their main goal was to form full-fledge doctors able to deal with most of the common daily problems, but further, to develop the medicine practices, bringing it to the next stage. The Schola Medica Lorenziana was responsible for mapping most of mortal and vampire anatomy, developing new surgery procedures and several plagues special treatment, but also improved healing salves and spread the pain-killers usage during surgery and wounds treatment.
However, the golden days of the Schola Medica were doomed to end. Firstly, most of the mortals preferred to rely on the magickal powers instead of submitting themselves to the physicians’ painful procedures. Additionally, San Lorenzo was affected by a terrible blight that caused the death of several masters, physicians and peasants entire all its acreage. Some believe that this blight was causes by the master Bathory, who also studied the dark arts of death.
Therefore, part of the doctors that survived the blight started to aid its former friends and master. All the rest just left San Lorenzo, looking for other cities to spread their own acquired knowledge. Those who stayed in the city also faced the terrible madness of the Bathory master, who slayed most of the citizens during his own studies.
Ignazio was one of a few that avoided such horrible fate. Further, he was able to gather several books and annotations from the Schola Medica, which he brought with his personal belonging. For years he continued his duty as a Plague Doctor, his specialty since he was formed in the Schola Medica.
After years of pain and struggle to avoid the terrible blights, he moved to Venexia, in order to secure his own studies and to make sure that all such medical-care knowledge would not be lost.
Formation:
Formed at Schola Medica Lorenziana (7 years practice)
Former Professor in “Infectious Disease Epidemiology”
Former Researcher in “Coronary Circulation Anatomy” – aiding master Mansur Tashrih al-badan (Anatomy of the body)
Former Researcher in “Structural Circulatory Systems” – aiding master Mansur Tashrih al-badan (Anatomy of the body)
Former Researcher in “New Surgery Procedures” – aiding master Plinius Salernitanus (Chirurgia’s procredure)
Dottore – San Lorenzo Head Physician, including the 2 years period of a Black Death infection (4 years)
Dottore Peste – wandering Plague Doctor, responsible for aiding and tending diseased people in several cities across former Italy states and French states – (5 years)
Currently – Dottore Peste and Physician at Ufficio del Dottore in Venexia
Additional Information:
Personal Surgery Apparatus on his apartments, with a surgery room and medicine-pharmacology library
Personal Herbs and pharmacology supplies and suppliers’ contacts in other cities across Italy 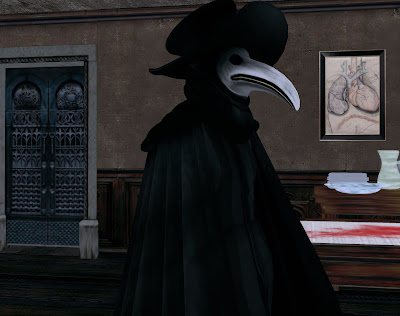 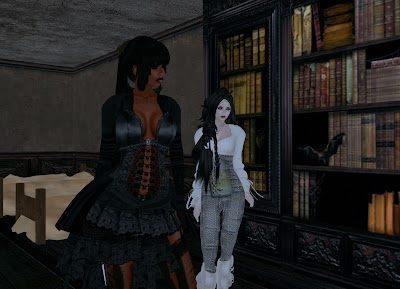 Their First Meeting
Emberen Twine enters the room, eyes vacantly trailing over everything, fingers drifting from surface to surface. One might get the impression that her touch is gathering more information than her gaze. Finally, her focus settles on the rather familiar cloaked figure and her smile twitches. Eyes dart to the priestess, then back to the male, smile igniting. Playtime? She remains silent...and stares.
Plague Doctor (proudfang) 's dark silhouette stands in the shadows, close by the surgery table tainted in recent blood. The only sounds that echoes in the silent office is the cold breeze that flicks the candle lights and doctor's heavy breathing that flows throughout his white and frightening mask. He nods briefly, in sign of reverence, as he raises his hand, motioning in direction of the office hall. "Good evening your highness.. It is a pleasure to meet the High Priestess herself.. I heard that you hold more knowledge and secrets than the entire daemonican library.. Please.. I hope you feel comfortable at my humble lair... " He slowly turns to the other mistress, bowing in respect as he continues his speech with his usual muttering tone. "And you too my dear Mistress.. Well.. I guess you might know me by previous indication, nonetheless the etiquette requires me to present myself.. I am the Plague Doctor... Ignazio.. your faithful servant.." 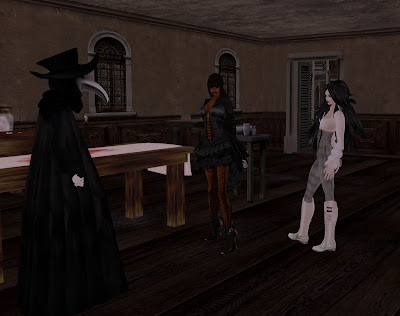 Skarlet Winterwolf  gives a nod yet remains expressionless as she continues to study Ignazio. "A pleasure to meet you also Doctor. There are many in the coven who speak highly of you and your work." she says before gesturing towards Ember "This is Ember, she is most curious to meet you also."
Emberen Twine: "Seeervant," she sings softly, smile flickering in time with the candle. She remains tucked just behind the Priestess' left shoulder, her eyes fixating on the mask, then giggles. Slender fingers dart to her lips as the sound bubbles forth, eyes shifting to her elder ready to make apology should her utterance be an interruption. Her gaze returns to the man, chin dipping with an almost...predatory... excitement. "Curious," she repeats softly.
Plague Doctor (proudfang) slowly walks towards the book case, as he listen to the words of the High Priestess. Regardless of her chair in the chambers of power, his respect lies on the knowledge such fascinating master has acquired through its years of research, the information he now requires for the success of their experiment. The vampires can smell a rather strange scent of mirrh and lavender mixed with a deep cold blood and pus comming from his mask. He tilts his head as he reaches an odd book from the shelves, made in thick leather, resembling a skinned animal. He slowly turns his attention back to the ladies, while he coughs briefly. He clears his throat and continues his speech. "I feel honored of your visit to my own chambers.. Nonetheless, I believe that my dear mistress have a tight schedule for loosing their time with pitious speeches.. I beg your pardon for my previous verbose.. I shall be more direct.. I guess you would like to have a better insight on my researches.. both medicals.. and metaphysical ones..."
Plague Doctor (proudfang) clears his throat once again, while continuing his speech. "During our studies.. we developed the concept that the difference between the vampire blood and mortal blood is the primary goal for the ultimate question.. As I continued my research.. I found that the life essence, the very energy that your Chosen anatomy sips from the mortal vitae is what bounds the vampire soul to our realm.. Instead of living forever.. Vampires actually are one step closer to the death every day.. Nonetheless, the heritage and heirlooms found in your bloodlines are too strong to allow a normal vampire to be attuned with death itself.. thus contacting the wandering souls of the Underworld.."

Posted by Breezy Carver at 4:34 PM